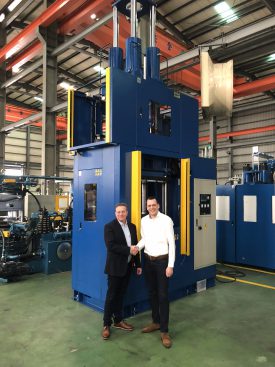 RIS Rubber made an enormous investment this year when it purchased no less than five new presses. Some of the presses were replacements for obsolete equipment but they were also part of the company’s strategy to enable it to respond to the increasing demand for moulded rubber products.

The investment concerned four injection presses and one compression press. Three are already in operation and two will follow in the autumn. The machines were bought from Pan Stone (www.panstone.eu) and produced in Taiwan. According to Wouter Rietdijk, director of RIS Rubber, RIS Rubber has been collaborating with Pan Stone, which is specialised in the construction of machines for rubber applications, for five years. “We were looking for a new partner and Pan Stone has certainly come up to our expectations. It has now delivered a total of 13 machines, including the new ones.”

Injection press – up to 20 litre shot volume
The four injection presses are very diverse: the smallest has a closing force of 100 tonne and a maximum shot volume of 2 litre. With a maximum shot volume of 20 litre and a closing force of 500 tonne, the largest machine, which weighs almost 20 tonne, is a welcome addition to the RIS Rubber’s existing machinery. Thanks to its large shot volume, larger products are possible and work can be carried out with multiple cavities per mould, so that RIS Rubber can realise faster lead times.

Compression press – for agriculture
This new compression press, which has a closing force of 500 tonne, complements the six C-frame presses already present. The press, with its production width of up to two metre, is used primarily for long products, almost all of which are parts for agricultural machines.

10% growth in workforce and machines
These five machines are located at the branch at Kula, Bulgaria, where the larger series of moulded rubber products are mainly produced. “RIS Rubber is growing rapidly; this year we expect a growth of 10-15%”, Wouter Rietdijk says. “That applies to the agricultural branch, but we are growing in the other branches, such as automotive, offshore and recycling, too. Our new, better machines will help us to handle this growth. We are investing in new employees at the same time – not only to operate these machines, but also for development, preparation and dispatch.”