The history of rubber

Home » The history of rubber

Natural rubber originates from the rubber tree, Hevea brasiliensis. During his second journey to Central America in 1493, the explorer Christopher Columbus was the first European to come across rubber. The Maya, who had been living in the Amazon region for centuries, had long been extracting the white sap from these slender trees, which can grow up to thirty metres tall. At the time of Columbus, they were using it to make balls and toys. 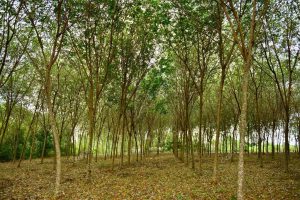 A major breakthrough occurred in 1770, when chemist Joseph Priestley noticed that lines drawn with a pencil can be removed using rubber. That is how the name ‘rubber’ – derived from the English verb ‘to rub out’ – came to be used.

The background of rubber

In 1839, Charles Goodyear discovered that the properties of rubber can be greatly improved by heating it with a small percentage of sulphur. This process is called vulcanisation. When rubber is vulcanised, it retains its elasticity but becomes stronger and less sticky. Vulcanised rubber could be reinforced even further by adding other materials such as soot. Goodyear had discovered the process of vulcanisation by accident when a mixture of rubber and sulphur happened to land on the stove in his workshop and he noticed the result. Following his discovery, rubber trees were planted on a large scale in countries all over the tropics, such as India, Ceylon and Indonesia. Thanks to these plantations, rubber products became available worldwide. Goodyear applied for a patent for his discovery in June 1844.

Extraction of the white sap

The milky sap of Hevea brasiliensis is extracted by making a groove through the bark into the cambium layer. The veins of latex are cut through so that the sap flows out. Collection trays are suspended under each groove so that the milky white sap can be collected. About 30% of the collected sap consists of rubber. A number of steps need to be taken to extract the rubber from the sap. The latex must first be filtered and diluted with water, after which the mixture is treated with acid so that the rubber particles coagulate. The coagulated rubber is then rolled into thin slices in a drum. At this point, the rubber still contains too much protein; these proteins may start to rot and must therefore be removed. The sheets are smoked in a dedicated chamber to remove the proteins, leaving brown, smoked sheets. These are stacked into bales and transported to rubber mixing mills. 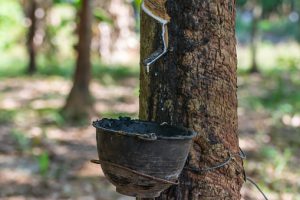 Driven by developments within the automotive industry, the demand for rubber had soared by the end of the nineteenth century and a synthetic alternative was sought to help to meet the increased demand. Synthetic rubber is made chiefly from crude oil. The production of synthetic rubber quickly rose to such a level that between the end of the Second World War and the 1970s it replaced natural rubber in the number one position.

Various types of synthetic rubber have been developed over the years. Many different rubber compounds are used in the manufacture of rubber products in our factories in the Netherlands and Bulgaria. In most cases, the rubber mixture is delivered to us by rubber suppliers in the composition required. If the rubber is still in need of pre-processing, this is carried out in our own factories.
Read more about the production process at RIS Rubber.