RIS Rubber has invested in a new compression moulding press 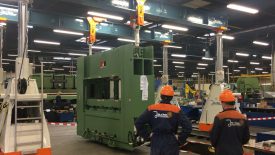 Transport of the press

The compression rubber-moulding press was transported to the Lelystad premises by a specialist transport from the Jan van Dam Group, and was also carefully installed by them on arrival. Jan van Dam has been operating a robot mover for some time now, and this ensured that the machine was accurately positioned on-site with the minimum of fuss. Because the robot mover is remote-controlled, a crane was not required.

The long-standing collaboration with Pan Stone (www.panstone.eu) has once more proved successful, and a 14th Pan Stone machine has now found its way into our factory. This brings the number of machines now operating in the Lelystad-based factory to 33, but the size of our machine park in Bulgaria remains much greater, with around 75 machines. By operating from two locations we are able to find a solution for almost any issue that may arise, ranging from limited series of small rubber moulded articles to very bulky and sophisticated rubber products.

The newly installed compression moulding press has a 1,000 ton clamping force and is equipped with 2,400 x 500mm heating plates. The new press has mainly been acquired for the production of the rubber slats familiar from the baggage carousels found in airports. One of our regular customers has increased the volume of their order, and the need to increase production has led to the purchase of the new press.

The new compression moulding press has also led to increased employment within RIS Rubber. In order to produce the large number of rubber slats required, the machine will have to operate for a full five days each week. This means that the press for rubber moulded products must be manned every day. RIS Rubber is justly proud that this fresh investment has been made in the growth of the business.