A lipseal is a rubber seal, also known as a rotary shaft seal. Lipseals are used for the protection of moving parts, for example, in bearings. The bearing is protected by a lubricant and the rotary shaft seal ensures that the lubricant remains within the bearing, thus eliminating contamination by any external dirt or liquids.

Lipseals are often used for the sealing of rotating elements, e.g. within hydraulic pumps. In most cases, they must be capable of withstanding the pressure exerted by constant movement, as well as the conditions to which they are exposed, such as grit or other contamination. 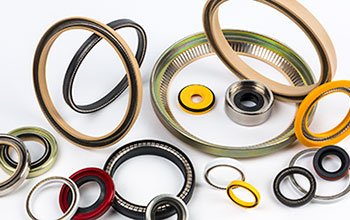 Life of a lipseal

The life of a lipseal depends on its environment and the amount of wear it has to undergo. It is essential that a lipseal is checked frequently and replaced if any damage is visible. High temperatures are the greatest challenge for any lipseal, and it is therefore essential to know beforehand the operating temperature to which the lipseal will be exposed. High temperatures are bound to dilute the lubricant, causing the rotating lipseal to dry out and become brittle. A frequently occurring problem is an insufficient amount of oil.

The rotary shaft seal can be produced in various ways. For example, we manufacture a lipseal that is built up from two grades of rubber; hard and soft. The hard rubber element is used for assembly whereas the soft grade functions as the seal.

The entire production of lipseals takes place in one of our factories, and involves the use of a mould and a rubber press. In consultation with the customer, we seek the best possible solution so that together we can ensure the supply of an optimal end product.

We would be happy to advise you about the possibilities we can offer, so please feel free to contact us without any obligation.