Combining different materials into one product 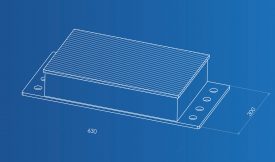 RIS Rubber and DRIE-D started working together in 2010 when we combined rubber and D-glide into a newly developed buffer pad. Both companies are technically driven and always looking for issues to resolve using our materials and expertise.
After our initial success in 2010, we saw that combining rubber, metal and D-glide material increasingly offered a solution in situations where high loads need to be absorbed and low friction is required. Over the years we have developed a large variety of buffer pads for various applications.

Ships flex and bend. Supporting a massive, heavy crane boom on such a ship creates large reaction forces and fatigue in the support and joints. DRIE-D and RIS combined their expertise in developing high-load, flexible support buffer bars with a robust, low-friction D-glide sliding surface.

Large and solid as they may seem, ships, even the largest offshore vessels, are actually very delicate constructions, flexing and bending in the waves. Supporting the booms of today’s large offshore cranes is therefore no easy task. With every wave cycle, the booms flex and move on the support cradles, causing high shear forces, fatigue in all connections and profuse wear of the supports. 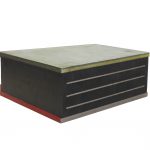 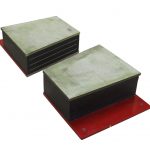 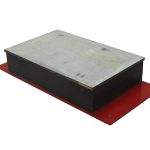 Bespoke buffer bars were designed, consisting of a rubber-metal base structure, with a vulcanized D-glide top plate. The rubber-metal base is designed to absorb any large loads that normally occur, combined with a low stiffness in the shear direction. This way the horizontal motions produce low forces in all connections.
With larger motions, the boom begins sliding on the D-glide top layer, which is many times sturdier than commonly used wood or thermo-plastic supports. Friction values are very low, effectively limiting the maximum horizontal loads on the boom hinges and all structural components involved.

The flexibility of the buffer bars and the low friction and unparalleled wear resistance of the D-glide top plate effectively put an end to the fatigue and wear problems that occur in the traditional crane boom supports of sea going vessels.

Both DRIE-D and RIS Rubber experience the cooperation between their two companies, which has been ongoing for 10 years, as extremely amicable. The products created thanks to this close cooperation function properly and are distributed worldwide. More great projects are planned for the years ahead.