Rubber down the drain

Home » Cases » Rubber down the drain 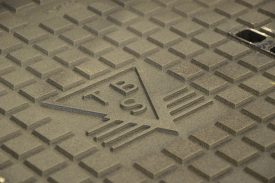 Have you ever taken a good look at a manhole or drain cover? There is a good chance that is bears the letters TBS and that we have applied rubber to it.

The abbreviation RIS is short for Rubber Industrie Soest; that is because Soest is the place where we set up business in the 1950s. We subsequently relocated to Lelystad due to the growth of the business and the need for more space, but we have always retained the name RIS; not necessarily as an abbreviation, but rather as a nod to our origins. The first assignment that was entrusted to us in Soest came from the company Technisch Bureau voor gietijzer producten Soest (TBS), for whom we applied rubber jointing to drain edges, ventilation grilles and manhole covers. Now, more than 70 years later, TBS still is a good customer and our collaboration has extended into a wide range of products.

TBS was founded in the 1930s, and initially they only produced drains and drain covers in cast-iron. Just before the war, however, iron became scarce and therefore very expensive. Because of this, TBS experimented with a combination of cast-iron and concrete. Due to the high quality and low cost, this turned out to be a great success. In the years that followed, TBS saw sustained growth, eventually becoming market leaders in the domain of drainage and manhole covers, slides and return valves. TBS was taken over by Triacta in 2017, and in 2020 they joined forces with SVA, whereby both businesses were incorporated as a brand within the TBS-SVA Group in Nederweert. 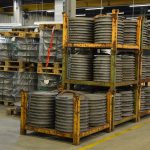 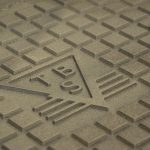 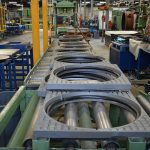 Cast-iron, rubber and concrete in a single product

Rubber is applied to TBS cast-iron in our Lelystad-based factory, where we equip drain edges, ventilation grilles and manhole covers with rubber jointing. This jointing helps to minimise noise pollution when traffic goes over the covers. The rubber also absorbs vibration, reducing wear and tear and extending the life of the products. 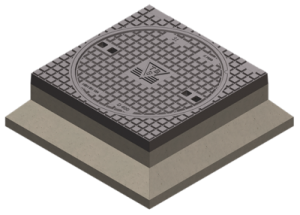 Metal and rubber are not materials which associate naturally, and a production process has been developed to successfully join these two materials. Cast-iron from a sand mould has a rough surface, meaning it does not have to be roughened, so an adhesive primer is applied directly to the edges, grilles and covers of the drains to make the rubber stick to the metal. Non-vulcanised rubber is placed on the cast-iron once it is primed, after which the moulds are positioned accurately on top. The cast-iron, together with the mould, is then put into the hot press and the vulcanising process is started. The shape and specific properties of the rubber emerge in the course of this process. Any superfluous rubber is removed once the process is complete and a layer of black paint is applied to the product. The cast-iron is further processed into its concrete housing in the Nederweert-based concrete plant, after which the final product is ready for use.

This is a fascinating process, in which three very different materials – cast-iron, rubber and concrete – are fused together in one product. Then they vanish into the surface of the street. Effective drainage is becoming ever more important, and we are therefore proud to be able to make a contribution by collaborating with TBS-SVA. 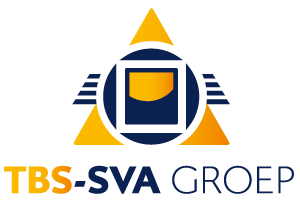