The deployment possibilities of rubber are virtually infinite. RIS Rubber has been producing moulded rubber products since the 1950s, and we develop rubber compounds in collaboration with suppliers from all over Europe. In most cases, such a rubber compound or mixture is delivered to us ready-made in various formats, such as slabs, calendered material or strips. There are, however, some cases in which we ourselves pre-process the rubber at our production sites.

The rolling, punching and extruding of rubber

The rolling of rubber
We cut rubber slabs to the right size in order to fill the moulds as rapidly and efficiently as we can. If possible, we re-use the rubber scraps that are left over from the cutting process. Cutting scraps are kneaded by the roller into a homogeneous mass, after which slabs are cut from the rubber on the roller and placed in cooling racks. After cooling, the rubber can be cut again to the required size. In this way we can limit the amount of waste.

The punching of rubber
The punching of rubber is a form of pre-processing performed in our factory to facilitate the production process and enable us to produce with enhanced precision. Punching is a process used to cut out specific forms in one go. A rubber slab is positioned on the punching machine, and the knife of the machine punches pieces with the correct dimensions out of the slab of rubber.

The extruding of rubber
Extrusion is another pre-processing method we use; we can extrude rubber in the form we need to accelerate production. This method is often applied to fill moulds for several types of ring quickly, for example, for a lip seal (link). Extrusion means that the rubber is kneaded in the extruder so that it eventually assumes the correct shape when extruded through a sprue plate.

After the rubber has been pre-processed, it is transported to the pressing department where it can be used to start production. Production takes place in a vulcanising press with a built-in mould. A mould is what gives a rubber product its shape. The combination of a mould and a press produces the eventual shape of the moulded rubber article.

Either an injection press or a compression mould press is used for the pressing process. The rubber in an injection press is hot-injected into the mould. This method of vulcanising is highly suitable for large series because of its short production times. If a compression press is used, the cold rubber is placed in the mould manually. Due to the closing force and the heat of the press, the rubber will be shaped to fill the cavities in the mould. 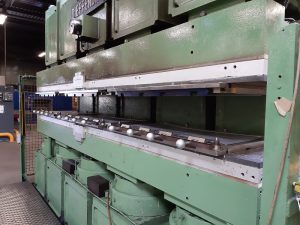